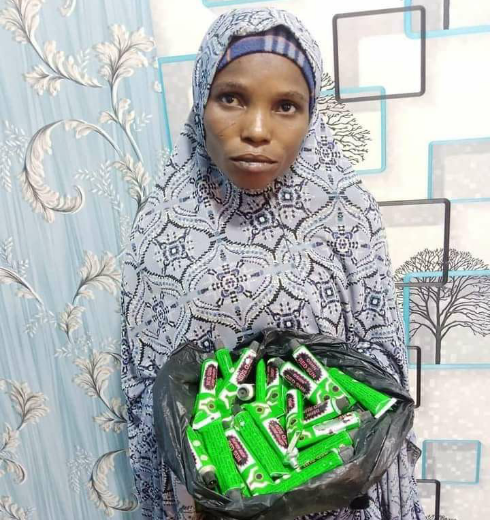 A 30-year-old widow identified as Jamila Abdullahi, has been arrested by the Kano State Police Command for allegedly dealing in illicit drugs.

According to the Spokesperson of the command, SP Abdullahi Haruna Kiyawa, who revealed this in a statement on Monday, May 2, said the suspect confessed to have been in the business of selling intoxicating drugs for over two years.

“On the 30/03/2022 at about 1200hrs, credible pieces of information received revealed that one Jamila Abdullahi, ‘f’, 30 years old, of Kwanar Ungogo Quarters, Ungogo LGA Kano State engaged in buying and selling of illicit drugs”,

“On receipt of the reports, the Commissioner of Police, Kano State Command, CP Sama’ila Shu’aibu Dikko, fsi directed Ungogo Divisional Police Officer, SP Murtala Mohammed Fagam to invite the woman as well as the community policing stakeholders of the area. She was invited and in front of her relatives and their ward head, she signed an undertaking not to involve in such an act again.

“On the 30/04/2022 at about 1000hrs, a team of Operation Puff Adder led by DPO Ungogo Division while on surveillance patrol along Kwanar Ungogo area, intercepted the said Jamila, in possession of thirty-five (35) tubes of Rubber Solution.

Credible information received revealed she is the major dealer of Rubber Solution that is used for intoxication in Ungogo LGA and environs.

On investigation, Jamila confessed that she is a widow, and she has been in the business of buying and selling Rubber Solution for over two years. After her first invitation she stopped, but later continue selling the robber solution.

She further confessed that she used to buy the intoxicants from someone. Having learned about her suspected arrest, the person was said to have escaped and left the country.