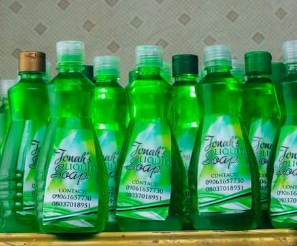 A blind man identified as Jonah Gabriel Danon, from Plateau state, has wowed the public with his skills after making a healthy liquid soap for home use and needs the public to patronize him.

In a story shared by a good Samaritan on Facebook with a username as Isaiah Asieba, says Gabriel was a carpenter before he completely lost his sight in 2016.

However, Gabriel didn’t allowed his condition to weigh him down, but decided to train himself at the vocational school of the blind in Zawan, Jos South LGA of the state where he learned to use his hands to do various crafts, one of which is liquid soap making.

“The ability to suppress our limitations comes from sheer determination and exercising our willpower to the fullest. (Isaiah Asieba) Jonah Gabriel Danon is an indigene of Plateau state from Riyom local government area. He was a carpenter, up until 2012 when he started battling with eye problems which eventually deteriorated to complete blindness in 2016. He accepted his fate and resorted to training himself at the vocational school of the blind Zawan, where he learned to use his hands to do various crafts, one of which is liquid soap making. He produced some and gave to me, and asked to help him get help and support.
So I thought to start with packaging it in a more beautiful and decent way. Ladies and gentlemen, you can help pick one for the sum of five hundred Naira. For now we have a limited amount left, but ready to produce more as the demand arises. You can order for your restaurants, homes, offices, etc, and I will deliver wherever you’re at. Thanks to my friend Braun Adang who bought a good number of the product to gift different people. It may also interest you to know that dependent upon Jonah are his two children, his mom and late brother’s four children”.