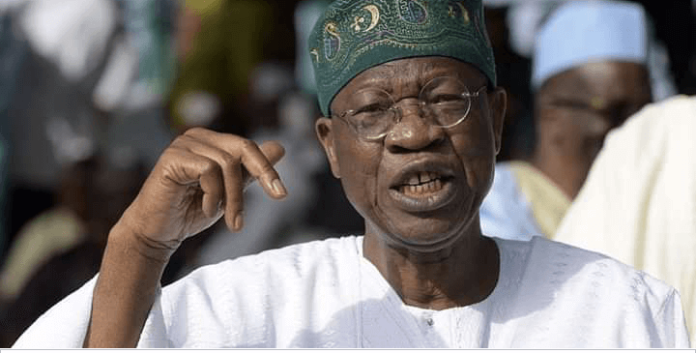 The Minister of Information and Culture, Alhaji Lai Mohammed, has revealed that bandits imposing levies on communities in the northern region of the country does not mean they have taken control.

This was disclosed by the Minister during a press conference that was held on Thursday, October 28, in Abuja, while reacting to an article by The Economist magazine titled, “Insurgency, secessionism and banditry threaten Nigeria.”

According to him, that the London-based magazine was wrong to claim that terrorists had carved caliphates for themselves in the North-East.

While answering questions from journalists on the security situation in the North-West where bandits now impose levies on communities, the minister argued that imposing levies does not mean criminals are in charge, adding that it takes place in many parts of the country, including in the South where touts commonly referred to as ‘area boys’, impose levies.

“Do you know how many places in this country where area boys collect taxes? And there is no terrorism or banditry there. I don’t want to mention names.

“In many of our cities, they carve out their own territory. So, it is not indicative of the bandits have taken over.

“No. I know many areas in Nigeria both in the South and the North where these kinds of things happen. So, it is not the same thing,” he said.

Mohammed said The Economist Intelligence Unit, which is a sister organisation of The Economist magazine, had predicted in 2019 that the Peoples Democratic Party’s presidential candidate, Atiku Abubakar, would win the election but the prediction turned out to be false.

“President Muhammadu Buhari won re-election by over three million votes. So, The Economist and other arms of the group are not infallible,” the minister said.

He argued that the idea of the Nigerian media regurgitating things published or reported by foreign media is antithetical to its reputation of independence and vibrancy.

“The Nigerian media does itself a great disservice by turning itself into an echo chamber of the foreign media. When The Economist reported its patently-wrong and badly-researched story, it was immediately amplified by the local media, without even interrogating its content? This is totally unconscionable!

“Again, at a time that Boko Haram and ISWAP are taking on each other in a mutually-destructive lockstep, and at a time that the terrorists are surrendering in droves as a result of heavy pounding by the military, it is wrong to say that Jihadists are carving out a Caliphate in the North-East, as The Economist reported.

“In any case, why would the Nigerian media become an echo chamber for a foreign newspaper that denigrates the Nigerian military and makes light of the sacrifices of our valiant troops? Would the British or American press regurgitate a report in the Nigerian press denigrating their militaries?”