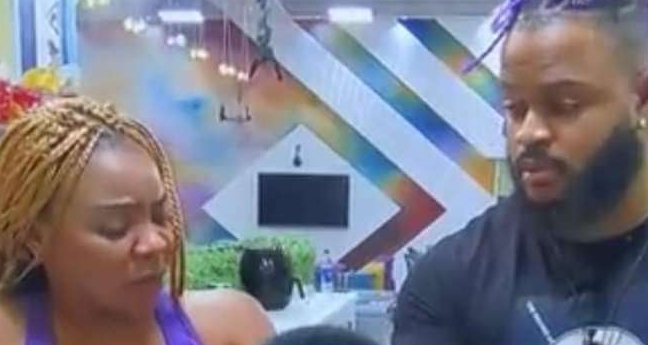 BBNaija housemate, Queen, has told her love interest WhiteMoney, that she doesn’t love him, adding that she’s only using him to catch cruise.

She revealed this while they were conversing inside the Head of House room on Sunday night.

According to her, that she was upset with WhiteMoney because he failed to praise her for being the one who walked up to Jackie B to resolve the issued they had because of him.

She further told him not to misinterpret her gestures towards him as she was only playing her game.

She said this after WhiteMoney told her that he felt hurt when she spoke about sleeping with Cross.

In her response, she said; “if I am given the opportunity, I would have sex with both you and Cross.”

“Am not sure what action I exhibited that gave you the vibe which says I love you. I feel like you’re feeling too special but you have to stop it because I don’t love you.

“The truth is, I would have sex with you and Cross if I am given the opportunity.

“I’m actually upset because you didn’t even bother to give me kudos for making up with Jackie B after we had issues because of you.

“I’m just here to play my game and have fun and that’s it”.