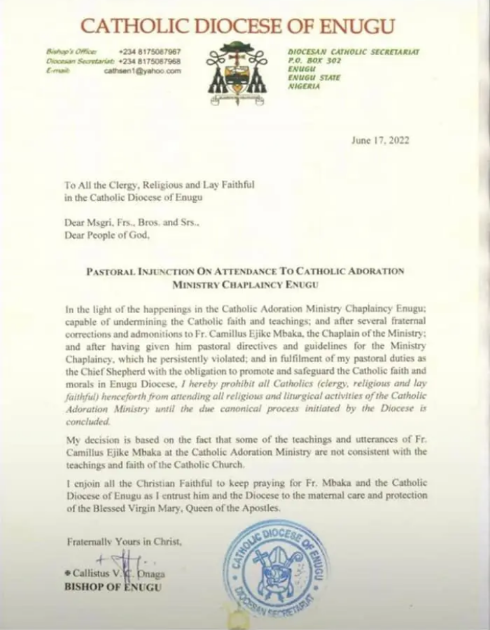 Information reaching Becksblog.com.ng, that the Catholic Archdiocese of Enugu state, has banned all priests and Catholic faithful from attending the Adoration Ministry, led by controversial priest, Rev. Fr. Ejike Mbaka.

The church said the ban will remain in force until the due canonical process initiated by the Diocese is concluded.

The ban followed the recent scathing remarks by the cleric, who described Labour Party presidential candidate Peter Obi as a stingy man.

Mbaka on Wednesday at his adoration ground said Obi would never become President for being stingy.

The cleric declared that Obi could only become the President if God ceases to exist, adding that the former Anambra Governor is under a curse.

According to the priest, it would be better to have an old man as President than a ‘stingy young man’.

Mbaka’s remarks drew flaks from various quarters, prompting the under fire priest to backtrack and apologise for maligning Obi and injuring his supporters.

In a letter he personally signed and addressed to all clergy, religious and lay faithful, the Bishop of Enugu Catholic Diocese, Most Rev. Callistus Onaga, banned all Catholic faithful and clergy in the Diocese from having anything to do with the Mbaka’s Adoration Ministry.

The letter reads: “In the light of the happenings in the Catholic Adoration Ministry Chaplaincy Enugu capable of undermining the Catholic faith and teachings; and after several fraternal corrections and admonitions to Fr. Camillus Ejike Mbaka, the Chaplain of the Ministry.

“And after having given him pastoral directives and guidelines for the Ministry Chaplaincy, which he persistently violated; and in fulfilment of my pastoral duties as the Chief Shepherd with the obligation to promote and safeguard the Catholic faith and morals in Enugu Diocese, I hereby prohibit all Catholics (clergy, religious and lay faithful) henceforth from attending all religious and liturgical activities of the Adoration Ministry until the due canonical process initiated by the Diocese is concluded.

“I enjoin all the Christian Faithful to keep praying for Fr. Mbaka and the Catholic Diocese of Enugu as I entrust him and the Diocese to the maternal carç thee and protection of the Blessed Virgin Mary, Queen of the Apostles.”