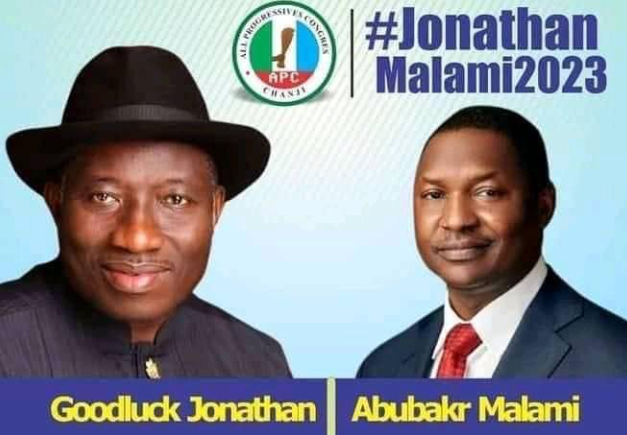 As the 2023 general election is fast approaching, former President Jonathan and Malami’s poster has been seen going viral online as running mate.

However, a group named Arewa 2023 Agenda for Peaceful Transition, has alleged that Nigerians may not have the list of the crises in the All Progressive Congress, (APC) ruling party.

This was disclosed on Sunday, July 18, by Usaini Ibrahim Kano, the group’s national chairman, who said that the Jonathan-Malami posters have already circulated on several important sites around the country, indicating that the agenda is well advanced.

“This development comes on the heels of the National Convention and Congresses at the State level, which were originally postponed twice,” the group said. As preparations for the 2023 general election began in Ernest, there was concern about the cost of nomination forms for the various political offices of the party.

“Observers argue that the internal wrangling over INEC’s decision to expand the number of polling units across Nigeria is child’s play in comparison to the party’s unresolved legal matters, numerous reconciliation committees whose findings are still pending, and the party’s new financial challenges.” According to them, there has been a long-running internal war between all factions, including important players in the merger that gave rise to the APC in 2015.