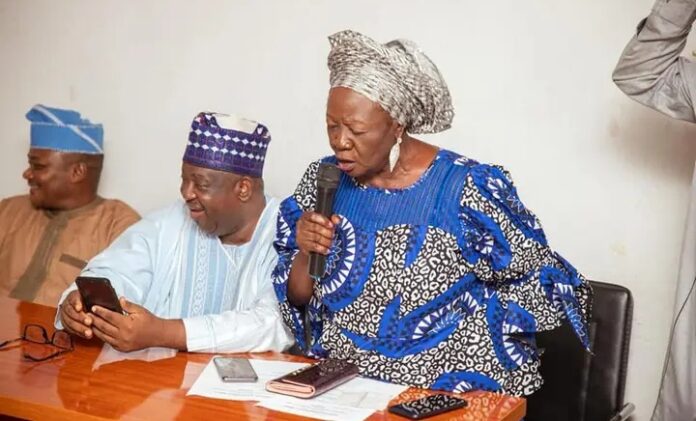 Becksblog.com.ng has confirmed that Mrs Piyo hails from Riyom local government area of Plateau State and was a trained healthcare worker and served as a public administrator before becoming a consummate politician.

She was also a nurse and teacher before being elected into the Plateau State House of Assembly in 1999, and also served as chairman of Riyom LGA of the state, among others.

Mutfwang while presenting her to the public at the State Party Secretariat in Jos, on Tuesday, June 21 said;

“It is pertinent to mention that since my election, I have taken the responsibility of providing leadership seriously. I have begun by talking with and where possible visiting my fellow contestants. I am very grateful for their sportsmanship and solidarity thus far.

“The discharge permit to place on record the unflinching support I have enjoyed from the leadership of our Party across the state, elders, stakeholders, and supporters since I emerged as our gubernatorial candidate.

“Today is a day of history. I must begin to demonstrate my capacity for leadership by taking a very tough decision-the choice of a Deputy Governorship candidate for our great party.

“Fortunately for me, I have an array of qualified men and women to choose from. Ironically it is a difficult one since it can only be one person!

“In making this decision, I have made far-reaching consultations with leaders of our Party, Stakeholders, and various Caucuses before choosing my running mate in order to enhance the joint ticket going into the general elections.

“Some of you will recall that in the course of my campaigns before the party primaries, I made a commitment to giving a voice to the voiceless.

“I make bold to say that a critical segment of our society that is often neglected in leadership considerations is the women folk and yet they form a formidable percentage of our population. For me giving them a voice is a compelling necessity.

“I, therefore, have the honour and privilege of introducing to our party members and Plateau people a respected Plateau woman, mother, grandmother, daughter of Barkin Ladi, wife of the people of Riyom.

“Ladies and gentlemen behold the Honourable Mrs. Josephine Chundung Piyo, as my Running Mate”, he declared.

“Like I said earlier the choice of a running mate was a difficult one, as the array of eminently qualified people representing different voting blocks including the “not too young to run” was brought forward.

“However a decision had to be made just like I have done. I want to appreciate all those who had hope of emerging from this process but couldn’t be selected.

“The work ahead is enormous and requires men and women of tested quality to carry out. God willing, you will be partners in the rebuilding process of our state in one position or another.

“I want to passionately appeal to every true party man and woman of good conscience to join hands with us in this great task of winning the 2023 elections to enable our party the PDP, bring succour to the good people of Plateau State”, he admonished.

Responding, Piyo who had served as a Special Adviser to the Executive Governor, of Plateau State from 2008 to 2011, assured of her total loyalty to the gubernatorial candidate and the party.

“I will give you the maximum support, and will not betray this trust, by the grace of God”, he assured.