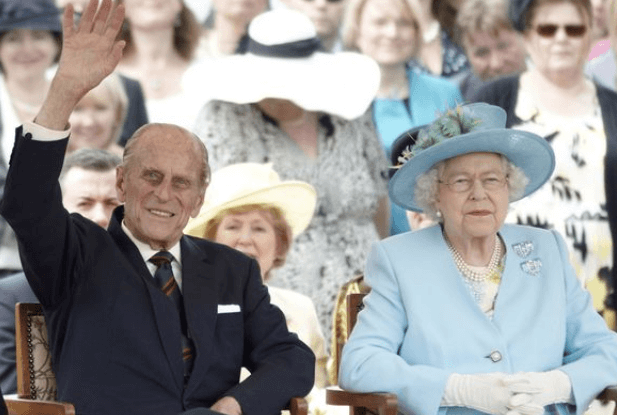 The prince married Princess Elizabeth in 1947, five years before she became Queen, and was the longest-serving royal consort in British history.

A statement from Buckingham Palace said: “It is with deep sorrow that Her Majesty The Queen has announced the death of her beloved husband, His Royal Highness The Prince Philip, Duke of Edinburgh.

“His Royal Highness passed away peacefully this morning at Windsor Castle.”

The Queen is mourning the loss of her “strength and stay” the Duke of Edinburgh, Prince Philip, who has died aged 99 at Windsor Castle. He was two months from turning 100.

Prince Philip has died peacefully at Windsor Castle at the age of 99, just weeks after he was released from a London hospital and reunited with the Queen.

The Duke of Edinburgh, who had recently been treated for a pre-existing heart condition and an infection, died on Friday morning, just two months before his 100th birthday.

A statement from Buckingham Palace said: “It is with deep sorrow that Her Majesty The Queen has announced the death of her beloved husband, His Royal Highness The Prince Philip, Duke of Edinburgh.

“His Royal Highness passed away peacefully this morning at Windsor Castle.

“Further announcements will made in due course. The Royal Family join with people around the world in mourning his loss.”

The flags in Downing Street were lowered to half-mast following the announcement.

The Duke of Edinburgh was once described by the Queen as her “strength and stay” and has been a constant presence by her side for more than 70 years.

Born in 1921, Philip served in the Royal Navy and has become known over the years for his jokes and gaffes.

After he first met the Queen, Elizabeth “never looked at anyone else” and once Philip proposed his destiny as royal consort was sealed.

Putting aside his own career ambitions, he proved his strong sense of duty serving the country through hundreds of engagements every year, refusing to stop working even in his 90s.

He became patron or president of 800 organisations, founded the Duke of Edinburgh Awards in 1956 and won a place in the nation’s hearts for his no-nonsense attitude and witty quips, or “gaffes”.

He leaves behind four children, eight grandchildren and eight great-grandchilden.

It was perhaps an unexpected path for the boy born on June 10, 1921 on the Greek Island of Corfu and descended from Greek and Danish royalty.

While not exactly from humble beginnings, Philip’s childhood gave no clue that he would one day be the longest-serving British royal consort and a key figure at the heart of the world’s most famous Royal Family.

His mother was Princess Alice of Battenberg and his father was Prince Andrew of Greece and Denmark and he was their only son with four older sisters.

His family was exiled from Greece when he was a baby and Philip was educated in France, Germany and the UK.

He eventually joined the British Navy in 1939 age 18 and served in the British Forces during WWII.

Elizabeth and Philip became secretly engaged in 1946, but the formal engagement was delayed until Elizabeth turned 21 in April 1947.

He changed his name to Mountbatten – the anglicised version of Battenberg – before the wedding in order to sound more British and they were married in Westminster Abbey on November 20 1947.

It was not long before the couple became parents with the birth of Prince Charles in November 1948 shortly followed by Princess Anne in 1950.

But on February 6 1952, a huge responsibility fell on Elizabeth’s young shoulders when her father died and she became Queen aged just 25.

From that moment Philip’s life also changed as his role became to support Elizabeth in her official duties.

Much later he admitted to the BBC about the job: “There was no precedent. If I asked somebody, ‘What do you expect me to do?’ they all looked blank.

“They had no idea, nobody had much idea.” Nevertheless he worked to carve out a niche for himself.

Two more children followed – Prince Andrew in 1960 and Prince Edward in 1964 – and Philip assumed the role as head of the household at home if not in official life.

In public, he may have walked a step behind his wife, but there can be no underestimating the importance of Philip to the Queen’s reign.

As she said herself in a speech for their Golden Wedding anniversary in 1997: “He has, quite simply, been my strength and stay all these years, and I, and his whole family, and this and many other countries, owe him a debt greater than he would ever claim, or we shall ever know.”

BBNaija2021: Drama As Nini Returns Back To The House, Pere Saw Her Coming (Video)