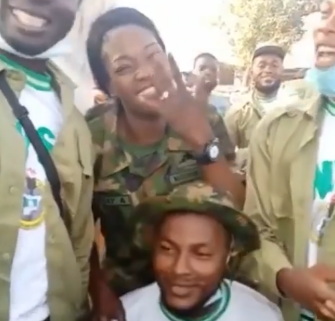 In a video seen online by Becksblog.com.ng, a male corps member was captured proposing to a female soldier at the Yikpata orientation camp of the National Youth Service Corps (NYSC) in Kwara.

In one of the video clips, some corps members were seen having a discussion at a venue believed to be the parade ground of the orientation camp.

The discussion was still on when the yet-to-be-identified corps member, who is seen holding a ring, went down on one knee and popped the question to the soldier with the lady accepting the proposal.

The corps member then went on to insert the ring in the finger of the visibly excited soldier amid cheers from others at the scene.

The soldier could also be seen relishing the moment as she kissed the ring at intervals with smiles etched on her face.

In another clip, the pair were further seen sharing lovey-dovey moments. The corps member was seen wearing the lady’s military cap as she stood directly behind him.

They thereafter shared a kiss — much to the delight of other corps members filming the incident.

It remains to be known how their love story started.

Watch the video below: