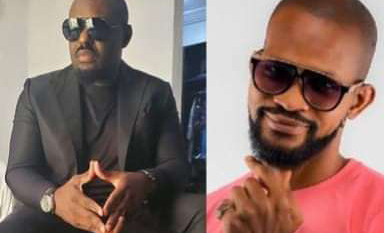 Days after controversial Nollywood actor, Uche Maduagwu made a video where he was seen questioning the source wealth of his colleague, Jim Iyke, saying his “mysterious source of wealth” attributes him to being a “ritualist”.

In the video Uche was heard calling out not only Jim Iyke but billionaire businessman, Obi Cubana and Hushpuppi as well, saying they’re about to nab Jim Iyke and Obi Cubana just like they did Hushpuppi last year.

According to Yabaleft, that there was a meeting between Jim Iyke and Uche where the former confronted the latter in his residence with a couple of people and during the course of the meeting, things got heated and Jim Iyke introduced his fists to Uche’s face.

A video that captured the moment of the confrontation was shared online and it’s quite audible what the two gentlemen had to say to each other.

With Uche asking Jim “How did you know that I’m here?” and Jim responding rhetorically before Uche saying “EFCC will carry you, you know they’re looking for you?”

The last comment seems to have agigated Jim Iyke who in turn threw punches towards Uche with the people beside him trying to restrain him from further assault.

Uche is later heard saying he’ll sue Jim Iyke, before Jim reintroduced his fists again and was still restrained by the people with him.