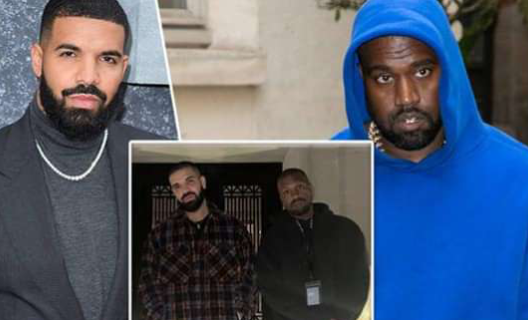 Nigerians have reacted after Kanye West and Drake settled their long time beef.

Fans however, called out popular Nigerian singers, Wizkid and Davido, to end their beef also.

Recall, the American and Canadian rappers had been at odds for years and threw lyrical shots at each other in the past.

They have however, decided to settle their differences and were seen together on Tuesday, November 14.

According to multiple report, that the duo met up at a Dave Chappelle comedy show in Toronto, Canada, and Kanye West shared a picture of them together on his Instagram page.

Drake also shared a video of Ye on his personal Instagram account as they partied at his mansion with Dave Chappelle.

The reconciliation is coming after Kanye West pleaded with Drake in a video to set their prides aside and end the quarrel.

The Donda star said; “I am making this video to address the ongoing back and forth between myself and Drake.

“I and Drake have taken shots at each other and it is time to put it to rest.”

Inviting Drake to perform with him on stage on Dec. 7, West added: “I believe this even will not only bring awareness to our cause but prove to people everywhere how much more we can accomplish when we lay our pride to the side and come together.”

Nigerians however, reacted and declared this period as “reconciliation season” because popular twin singers, Peter and Paul Okoye, also reconciled few days ago.

They decided to call out Wizkid and Davido to also reconcile.

Read some reactions below,

chizzyonline1 wrote, “Someone between machala and davido need to man up like Kanye did”

therealstainless wrote, “I dey wait for OBO and WIZ

Tega Under F.ire For Calling Boma “Bestie” In New Video As They Chill Together (Video)