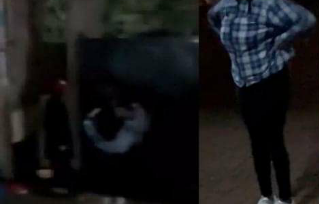 There was a mild drama in the Victoria Garden City (VGC) axis of Lagos State after a man and lady believed to be his lover took to the street naked.

In a now-viral video, seen by Truetells Nigeria, passersby confirmed that the duo were under the influence of hard drugs.

Some residents were also seen trying to stop them and find out what went wrong but the man and his lover kept walking around naked.

Although there was no evidence of what led to their strange behaviour, another group of witnesses attributed their walking naked to a ritual.

The incident happened on Sunday night.
In a note shared by one of the witnesses, woman is from the United States of America and came to Nigeria only last October.

According to the note, the pair were said to have attempted to kill themselves under the influence of the hard drugs.

The witness added that it took the intervention of the VGC security team to rescue them and rush them to a nearby hospital.

The source said, “Dear neighbours, greetings to you, all. Yesterday on our close, at about 11 pm, the Vice-Chairman called my attention to an ugly situation whereby two adults; male and female were seen walking around the estate completely naked,” it reads.

“Our estate security and management personnel accosted them and accompanied them to our close (63) where the duo purportedly resided in a BQ. As the case may be, the situation soon got out of hand when both adults slit their writs and necks in what seemed to be a suicide attempt, saying they would die and rise again in three days.

“Further investigation of their BQ apartments revealed some items such as illegal drugs and other substances. They were obviously under the influence of some substances (drug abuse).
“Thank God for the swift response of our management, security and medical team who eventually sedated the victims and took them to the hospital around 12.45am.

“Drug abuse is real. May God help our teens and let us be observant and to report anything that looks out of the ordinary within the neighbourhood. They were going into the 5th dimension ie kill themselves and rise after three days. It took about five hours to get them to the hospital on Saturday night. The girl is a full American that came in from the US in October to experience the 5th dimension with the guy.

“They got home and slit their wrists and necks and their door had to be broken down. The hospital said they were both on Colorado, Canadian Loud, aka Mkpuru Mmiri.”