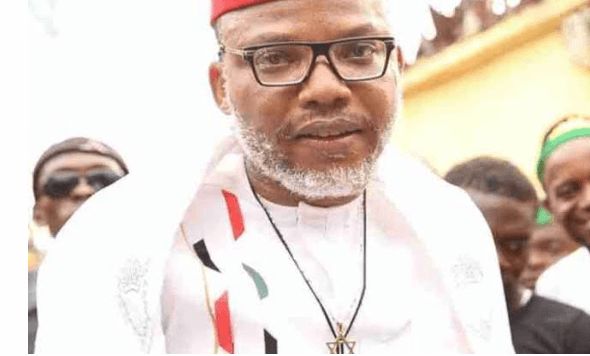 Benue state government, has warned the leader of the Indigenous People of Biafra (IPOB), and the Eastern Security Network (ESN), Nnamdi Kanu, to steer clear of Benue State.

This warning followed the recent threat by Kanu who says he will be sending ESN members to protect Igbo people living in Benue.

Kanu however, identified Ado and Oju Local Government Areas as places that need the presence of ESN.

In his reaction, Ado Local Government admonished Kanu to stop dragging Benue into “his self-seeking campaign”.

The Chairman, James Oche, told reporters on Saturday that the territorial integrity of the state would never be a subject of Biafra agitation.

He cautioned proponents of Kanu’s “inordinate ideology” in Benue to desist or face the wrath of the law.

On the IPOB leader’s comment about the “abduction” of 3 people, Oche clarified that they were arrested in connection with the murder of an elderly Fulani man, Mohammed Isa.

“It was an act that threatened the security of the area and made the Deputy Governor summon a meeting that was held yesterday in Makurdi with all concerned stakeholders.

“Kanu reportedly issued statements charging Benue Governor to protect ‘IPOB communities’ or he would send Eastern Security Network operatives to do so. He should stop insulting the sensibilities of Benue people.”

The LG boss assured that Governor Samuel Ortom was doing his best in terms of security.

He advised the people to remain calm and support the governor’s commitment to the full implementation of the Anti Open Grazing Law.