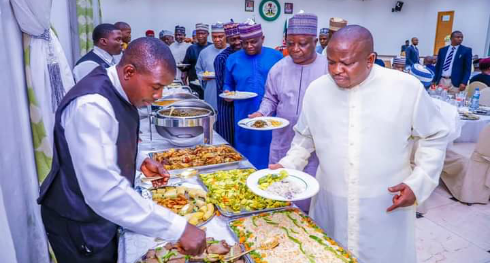 Plateau State Governor Simon Bako Lalong has hosted the Muslim Ummah in Plateau State to a breaking of fast as part of the Ramadan fasting period.

The dinner hosted at the Banquet Hall of the new Government House, Little Rayfield Jos had in attendance Muslim religious leaders and their Christian counterparts.

Lalong said the breaking of fast demonstrates the growing level of inter-faith dialogue among citizens of Plateau State.

He said; “This evening, we are gathered here across faiths to demonstrate that though Ramadan is essentially a Muslim festival, other faiths also share in the solidarity and goodwill because of our common heritage within the Abrahamic faiths. Besides, we are all created by God. Only recently, we Christian marked Easter to commemorate the death and resurrection of Jesus Christ. During that celebration, many Christians reached out to their Muslims brothers and sisters and celebrated together to demonstrate the love of God and affirm the unity of mankind. We believe the same will apply as the Muslim Ummah concludes the Ramadan fast and engage in festivities marking the event. I am happy that through robust engagement, dialogue and inter-faith activities, adherents of the Christian and Muslim faiths particularly in Plateau State are closing ranks and getting back to the good old days of oneness”.

Governor Lalong reiterated that his administration has invested so much time and resources in restoring peace and security to Plateau State by tackling religious intolerance, fighting bigotry and injurious preaching by some leaders and followers of both faiths. Through the Peace Building Agency and Inter-Religious Council, such efforts have reduced to the barest minimum the potential for religious crises.

“All of us have a duty to teach our younger one the fear of God, faithfulness to our faiths, respect for one another, and protection of humanity from the dangers of evil. Let our devotion and reverence to God be evident in the way we treat others particularly those who are of different faiths from us. Since God is love, nobody who truly claims to love God should hate or do harm his neighbor” he said.

In his remarks, Emir of Kanam Alhaji Muhammadu Babangida Muazu commended Governor Lalong for sustaining his peace initiatives which have continued to give Plateau a new perception and acceptance among Nigerians and non Nigerians alike.

He appealed to the Governor to continue to build the structures for lasting peace particularly by installing traditional rulers whose stools are vacant especially within the central zone. This he said will make it easy for Government to be proactive in dealing with any threat to peace.

Member representing Pankshin, Kanke, Kanam Federal Constituency Yusuf Gagdi called for more support to the Governor from the religious and community leaders as well as all citizens to enable him carry on with his pursuit for peace and harmony.

Gagdi said such support is necessary in order to deny merchants of crises the ability to foment trouble using religion.

National Secretary of JNI Dr. Khalid said the Muslim Ummah on the Plateau are delighted with the consolidation of achievements for a united, prosperous and peaceful Plateau State that accommodates all law-abiding citizens irrespective of their backgrounds under the leadership of Governor Lalong.

In his remarks, Chairman, Christian Association of Nigeria Rev. Fr. Polycarp Lubo praised the event describing it as a mark of brotherly love which is within the teachings of the Bible and the Quran.

Dr. Makut Simon Macham
Director of Press and Public Affairs to the Governor of Plateau State.