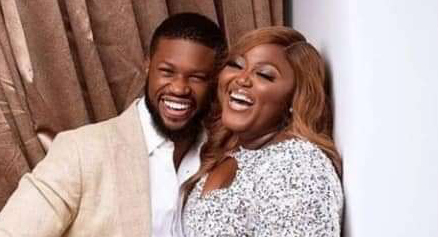 In a recent interview with Actor Stan Nze who just wedded his 42 year old wife, has revealed why he married her.

According to the 32 year old actor, says he married his 42-year-old actress wife, Blessing Jessica Obasi, because she gives him peace and she’s the one God created for him.

While speaking with BBC News Pidgin, Nze said many people asked him why he married someone that is ten years older than him.

He however, said he wants to ensure that he and his wife do not have issue in the first year of their marriage.

Tega Under F.ire For Calling Boma “Bestie” In New Video As They Chill Together (Video)