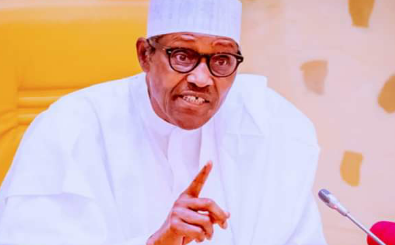 The President of Nigeria, Muhammadu Buhari, has on Friday, January 21, reassured the residents of Kaduna that his regime will crush all terrorists and criminal gangs operating across the country before the end of his tenure

This was revealed by the President at the State Banquet organised by Kaduna Governor, Nasir El-Rufa’i to commemorate his official visit to the state.

‘‘The relationship between our tiers of government represents an instance of successful collaboration between the national and State governments for progress, peace and prosperity. I urge Malam Nasir El-Rufai to push on and not relent in his efforts to accelerate change and progress in Kaduna State.”

Reviewing his programme in the State since he arrived on Wednesday night, the president expressed delight over the commissioning of projects undertaken by the State government.

‘‘Most of my visits to Kaduna State since 2015 have been in connection with clear strides of progress. I was here in 2017 to commission the hatchery and feed mill project of Olam, a multinational agribusiness company that has sited a major factory in Kaduna. In August 2019, I had the honour to commission Phase 2 of the Zaria Water Project and a road project.

‘‘Therefore, I am not surprised that Nasir El-Rufai and his team have undertaken such a major investment in infrastructure development. I am glad to say I have seen with my own eyes the remarkable changes across all the three Senatorial zones,’’ he said