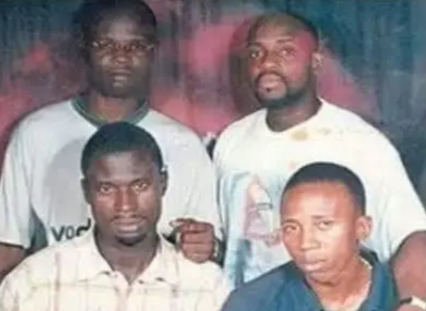 This is a History that deserves to live with us forever and what democracy meant to young Nigerians then.

On October 25, 1993. Four dissatisfied
Nigerian teenagers hijacked a Nigerian Airways airbus A310 that was flying from Lagos to Abuja and diverted the plane to Niamey, Niger Republic.

They were dissatisfied by the annulment of June 12 elections by the military Head of States, Gen Ibrahim Babangida. The young Nigerians, Richard Ogunderu was 19, Kabir Adenuga was 18, Benneth Oluwadaisi was 20 and Kenny Rasaq Lawal 19.

They all unassumingly boarded the flight at MMA alongside other passengers. About 16mins before landing, they waited until the pilot announced that passengers should fasten their seat belts and prepare for landing. Next thing the passengers heard was:👇🏼

“Ladies and gentlemen, this plane has been taken over by the Movement for the Advancement of Democracy. Remain calm, we will not harm you. You will be told where the plane will land you. You do not move or you die”.

The leader of the hijackers, Richard Ogunderu a 19 year old, walked into the cockpit and seized the process, and then one other followed. Two remained to watch over the passengers. When he got to the cockpit, the pilot knew immediately this was an attack, so he had to obey instructions given to him.

Ogunderu then asked the pilot to divert the aircraft straight to Germany. The pilot convinced him the plane did not carry sufficient fuel to crossover the Atlantic and then suggested they divert to a nearby country, Niger or they will crash and everybody dies.

The two hijackers told the pilot what they wanted was where they could give publicity to their reason for the hijack. They told him they wanted Germany, because they could have a good press coverage that would support their democratic cause for Nigeria. But that couldn’t happen because of the fuel shortage.

They agreed to land in Niamey, Niger Republic. Upon landing the hijackers found themselves surrounded by hundreds of armed Nigeriène soldiers at the airport. They had earlier distributed their demands in a pamphlets among the passengers calling on the Nigerian government to overturn the annulment of the June 12 election. They gave the government 72 hours to meet their demands or else they would set the plane ablaze.

To show they were not ready to kill anyone so long govt listen to them, they released 34 of the 193 passengers, among whom were top Nigerian government officials.

The leader of the hijackers spoke to a BBC correspondent. The correspondent asked what they were fighting for, and he told him, they wanted to actualize the mandate given by the Nigerian people to M.K.O Abiola.

Nigerian government sent 24 delegates to come and talk to the hijackers, but none of them entered the aircraft to talk to them, instead they were in the hotel, asking them to come down.

The Nigeriene soldiers did not storm the plane because..the hijackers claimed to have rigged the plane with explosives, and so began negotiations, keeping the remaining passengers hostage. For three days, the hijackers and the passengers fed on coffee & biscuits.

At some point, they ran out of water for coffee, one passengers demanded for water. Under the guise of bringing them water and food, the Nigeriène soldiers eventually realised the hijackers were not armed, and under the cover of darkness, they stormed the plane.

The four teenagers were arrested, cuffed hands behind their backs and taken straight to a prison cell. The hijackers spoke neither Hausa nor French and nobody made any attempt to question them in English. They were denied food for days.

The hijackers were remanded in Niamey prison for 9years before they were released in 2001. The Nigerian government didnt even bother requesting for them to be extradited. They wanted them away from Nigerian soil, to prevent them becoming a symbol of resistance to Nigeria’s youths.

TAKE HOME:- These TEENAGERS representated the generation of Nigerian youths 1993. Intelligent, bold, patriotic and courageous. They courageously believed they could save Nigeria from the tyrannical steel claws of the military Junta.

Richard Ogunderu, Kabir Adenuga, Benneth Oluwadaisi and Kenny Rasaq Lawal, I dedicate this June 12 Democracy Day to you guys. You are the Nigeria 🇳🇬.