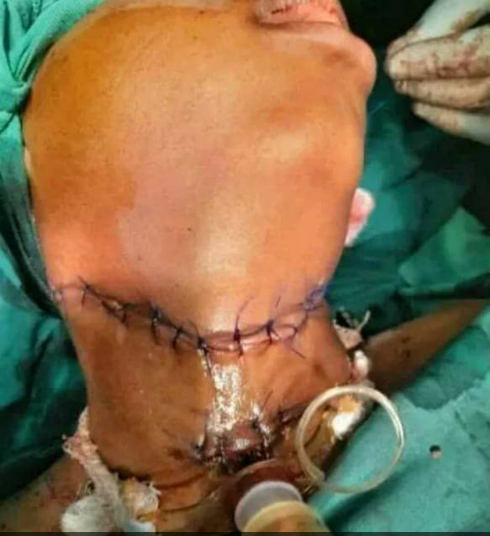 The Borno state Government, has set up a panel that will investigate the shocking incident in which the throat of an 11-year-old pupil, Jubril Sadi Mato a.k.a Ramadan was slit by his senior in School.

PM NEWS reports, that the commissioner for education has ordered the setting up of a five-man committee headed by the ministerial secretary in the education ministry, Alhaji Saddiq Kadafur, Hajiya Hadiza Nasir Waliare, and representatives of the police, DSS and NSCDC.

The almost slain Ramadan who is a son of Late Justice Sadi Mato, of Federal High Court Kano State, was attacked by an SS2 student, identified as Umar Goni on 16 January at Elkanemi College of Islamic Theology in Maiduguri.

According to report, that Goni used a razor blade to severely cut Ramadan’s neck because he refused to run an errand for him.

However, Ramadan reportedly struggled and took himself to the Principal’s Office, before he finally broke down and became unconscious.

Umar Goni who has been arrested by the police said;

“I did this thing because I told my parents to remove me from the hostel but they did not remove me”.

However, the victim’s mother, Hajiya Aisha who later re-married a Director with Yobe State Government said;

“We are happy that the Network for Civil Society Organisation Borno Chapters, Nigeria Bar Association (NBA), the National Human Rights Commission (NHRC), and The Federation of International Female Lawyers(FIDA) have vowed to investigate the case to ensure that the perpetrator was brought to book.

“It was also unfortunate to note that the University of Maiduguri Teaching Hospitals (UMTH), also joined the Elkanemi College of Islamic Theology in documenting false propaganda over the incident. In Jubril’s file, they wrote that the child fell and got injured instead of saying he was attacked by another person”, the mum said.

“Like everyone else, I heard the news of poor Ramadan’s incidence on the Social Media with great shock while conducting a competency training/assessment for 8000 teachers in Southern Borno.

“I immediately directed the only Director we left behind ( Director Quality Assurance) to investigate the matter.

“To my greatest shock, the story was true. Five questions came to my mind, what is the current condition of poor Ramadan?

“Why am I like everyone else reading the story on the Social media rather than an official report from the School to my office immediately the incident happened?

“What caused the incident? Who is the perpetrator? and was the action taken?

“I wish to assure the general public that we will get to the root of the matter. As for my dear Ramadan, I pray that Allah the Compassionate and Merciful will grant you quick recovery”.