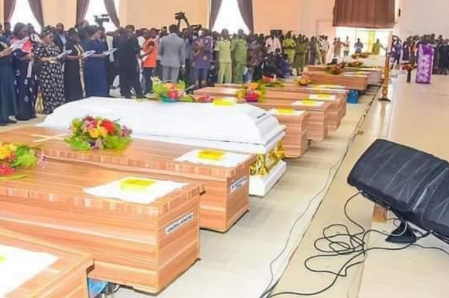 Loved ones and well-wishers gathered in Owo, Ondo State, on Friday as the Catholic Diocese of Ondo conducted a funeral mass for the victims of the massacre at St. Francis Catholic Church in Owo town on June 5, 2022.

The PUNCH reports that the worshippers were attacked by gunmen during mass which left scores injured and many others dead.

The remains of the dead, which were deposited at the morgue of the St Louis Catholic Hospital in Owo, were laid for the mass at the Mydas Event Centre in the town.

According to the church, no fewer than 40 people died in the attack while many others sustained various degrees of injuries.

Since the attack, state governments in the South West have pronounced official days of mourning in honour of the victims.

Meanwhile, the National Security Council on Thursday, June 9, revealed that the Islamic State, West African Province was behind the attack on the church, The PUNCH reports.

However, Akeredolu rejected the claim that ISWAP was responsible for the attack noting that the conclusion was hasty. He added that he took the conclusion with a pinch of salt, adding that ISWAP members were known to take responsibility for their attacks.