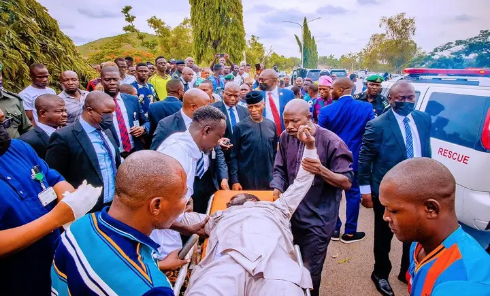 Vice President Yemi Osinbajo on Monday, June 5, stopped his convoy to rescue people who had been involved in an auto crash along the airport road in Abuja.

According to report, the vice president and his security aides were joined by other Nigerians to pull the victims from the vehicle.

Before now, information has been going viral on the internet that Osinbajo’s car somersaulted while going to pay a condolence visit to the victims of Owo, Ondo state attacks.

Recalled, Becksblog.com.ng had reported yesterday, June 4, how unknown gunmen stormed a Catholic church and killed dozens of worshippers while the Mass was still ongoing at St. Francis Catholic Church in Owo, Ondo state.