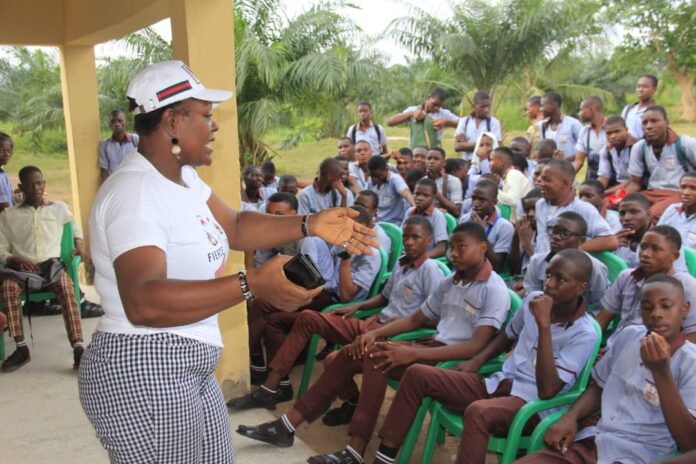 In an effort to set a goal for the younger generation, the C.E.O of Elona Development Foundation and State chairperson of Standup for Women Society(SWS), Mrs Stella Macaulay, in collaboration with Marie Stopes International Nigeria, has charged school pupils on the need to set goals for themselves by avoiding premarital sex that leads to teenage pregnancy and early fatherhood leading to school drop out among some teenagers in our society.

According to report, that the sensitization took place at Okwe Secondary School, in Oshimili South Local Government Area of Delta State, where the topic of discussion was focused on sexual and reproductive health concerns.

Mrs Stella Macaulay while speaking to some senior class students, decried over the rising cases of school drop out of the teenagers particularly the girl child due to early pregnancy.

According to her, Early pregnancy has trauncated the dreams of many teenagers in Secondary schools, the affected female child is forced to stop coming to school during he gestation period and eventually have to stay at home during the nursing of the baby, the male are also forced into early fatherhood, Macaulay added.

She however, charged the pupils to say No to premarital sex in order to achieve their various dreams in the future and to make their parents and society proud.

During the sensitization exercise, meaningful interaction, questions and answers were carried out between the students and their instructor.