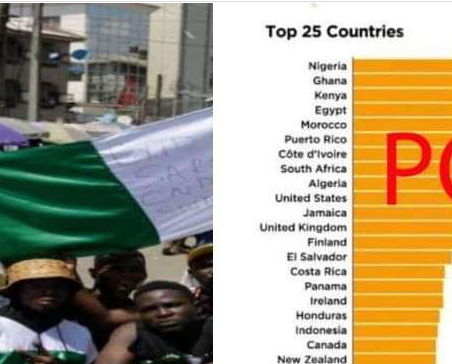 Information reaching Becksblog.com.ng, that the P*rnHub has ranked Nigeria as the highest patron of its p*[email protected] content in the whole world.

Ghana came second at the top of the list while Kenya and Eygpt maintained the third and fourth spot respectively.

Interestingly, although Ghana boasts of cooking better jollof rice than Nigeria, the latter has taken the top position on the list as the highest p**n-watching country in the world.

The world’s leading [email protected] company has released a list of viewers and subscribers from the Top 25 countries across the globe that patronize their products, according to a report sighted on Peacefmonline.com.

Despite Ghana being a religious country with Christians constituting about 71% of the population while Muslims make up about 17%, [email protected]úb says the citizens are the second- highest lovers of its p*n0graphic movies, pictures, and skits. Kenya took the third position on the list as another pr*-loving African country, representing the eastern part of the continent ‘proudly’.

What’s equally interesting is the fact that North African countries – Egypt and Morocco where about 90 percent of their citizens are Muslims came fourth and fifth respectively to complete the Top Five.

Ironically, United States, United Kingdom, Canada, France and others that are tagged as care-free and ‘immoral’ are rather trailing ‘moral’ African countries in the list that has been circulating online. Ghana ranked 2nd highest p**n-watching country in the world, Nigeria tops the list.