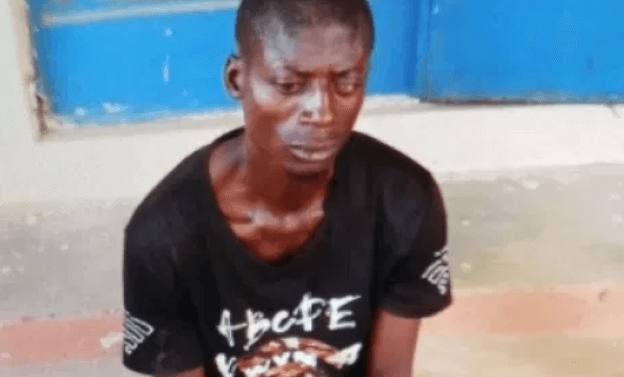 The Nigerian Police force have arrested a 35-year old man identified as Umaru Jibrin, who stabbed the Chief Imam of Enagi town, in Edati Local Government area of Niger State to death for allegedly having a sexual relationship with his wife, Aisha Umar.

According to report gathered by Becksblog.com.ng, that the suspect, Jibrin, stabbed the 48-year old Islamic cleric, Alhaji Attahiru Alhassan, when he caught him in the act, after he was invited by the Imam for a peace talk.

Jibrin was however, arrested by the police, while narrating what happened to newsmen at the Police Headquarters in Minna, Jibrin said;

“When I saw him on top of my wife, I said haba Imam why must you do this to me? Aisha my wife what are you looking for?”

The suspect further explained that he went out after asking them the question to see his brother, one Abubakar Abdulrahman inform him of what he saw.

“But, not quite long, the Imam sent for me for a peace talk, and to plead that the matter is concealed from the public,” he said.

However, an argument was said to have ensued in the process which allegedly made Jibrin forcefully collect the rod in the hand of the Chief Imam and stabbed in him in the neck.

Parading the suspect on Tuesday, the Police Public Relations Officer in the state, Wasiu Abiodun told journalists that when the incident happened, the suspect took to his heels but was later arrested at Batati village, in Lavun local Government Area of the state.

Abiodun said some youths mobilised to the police station in the area to lynch the suspect in a jungle justice but the policemen there intervened.

He however, advised the general public to desist from taking laws into their hand, saying that investigation into the incident was ongoing and that the suspect would soon be charged to court.