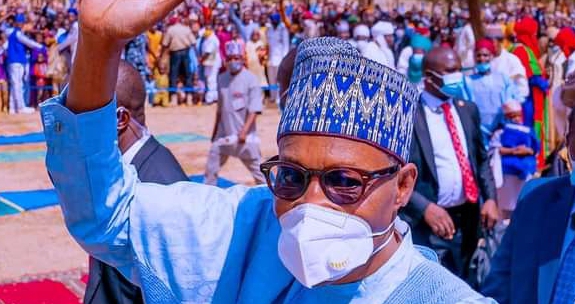 This was disclosed by the presidential spokesman, Garba Shehu, who boldly said that Nigerians will look up to president Buhari for guidance during the next general election, adding that the Peoples Democratic Party (PDP) should forget about returning to power in 2023.

According to report, the he said this to journalists in Katsina on Tuesday, July 20.

“I think it is in the interest of the opposition particularly, to admit that the president matters a lot to the people of this country. He matters to the party and the unshakeable support he enjoys in Daura and this country cannot be wished away, whether you are using digital media or propaganda.

“We see PDP nursing the false hope of taking over power in 2023. The masses will never abandon President Buhari’s leadership. I’m sure in 2023, they’re waiting for him to show the way.

“What he has been building in terms of infrastructure and the economy, and the wellbeing of young people of this country, nobody will put that at risk by inviting another party to come and take power in 2023.

“What is amazing is that across the world, the popularity of leaders has been shattered by COVID, but the opposite is the case here. President Buhari is increasing in his popularity.”

Shehu also said Nigerians abroad have nothing to gain by speaking ill of the country.

“There is nothing to gain by disparaging your country overseas because every citizen must respect their nation,” he said.

“I think Nigerians have to change. If we don’t promote it, nobody will do it for us. This is clear from the message by governor Masari.”

“He said he has been told by the economic advisory council that only two and half percent of the agricultural land is under cultivation. So, with over 97 percent available, there is no reason why people should not take to agriculture,” he added.