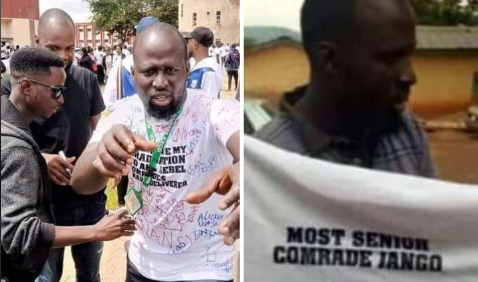 The most senior comrade as he is fondly called by many, officially writes his final graduating papers on saturday, October 23.

Aluta Jango as he is popularly called has been an “ICON” in the eyes of many in the university, the student is rumored to have spent well over 13 years in the university campus before this graduation.

According to report, Jango is visibly everywhere during his stay in the university, he attended old campus, main campus and the permanent site. JANGO is a very smart, sociable student who could memorise the hostel rooms of hundreds of students off hand.

In his days in the university, he participated actively in Political and social activities henced being crowned the “most senior comrade of the university”

The guy’s travails has made him often in the lips of many, one of the occasions where his named popped up online was when university of Jos students were having an online war with University of abuja students.

Other remarks on his graduation news include, “Jango should be a course to be studied in the University” , “this is a true example of What God cannot do does not exist” , Another commenter said “Jango has graduated but will he agree to leave the campus?”

Many other ladies also shared their experiences with the most senior comrade , most talked about how authoritative he is when he wants to woe a lady and some say he threatens, some others say he is the kindest guy they have met.

Whether the stories are true or not, Jango has made a statement that would be hard to be erased in the history of the university.

Some people said they have learned lessons from the dogged, never-giving-up, young promising man.