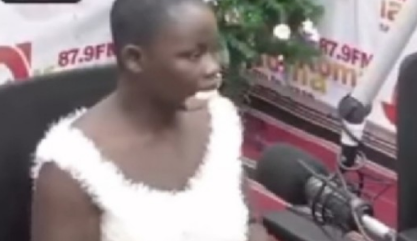 Video of a Ghanaian lady who claimed that her boyfriend always have sex with her aggressively whenever he smoked weed or taken Tramadol, has gone viral on the internet.

She also claimed that the situation is so bad as sometimes she bleeds during the process and even worst, but the boyfriend won’t stop until he ejaculates.

During the interview, her boyfriend who was sitting beside her in the studios of Akoma FM, could not defend himself as he flashed smiles in between her statements instead.

Watch the video below