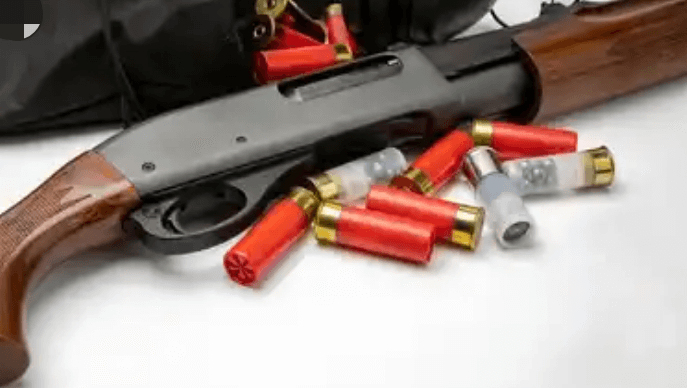 Governor Abubakar Sani Bello has promised to arm the vigilante group in Niger State with pump-action guns to enable them confront bandits and address other security threats, DailyTrust reports.

Speaking at Kasuwan Garba in Mariga Local Government Area of the state when he met with over 200 members of the vigilante in the area, Bello said the security volunteer groups would be armed to confront “these enemies of the people across the state.”

NDLEA Uncovers Cocaine Cache In Anambra Monarch’s Palace
Mind Your Language, Army Warns Gumi
The visit was part of his morale booster for the vigilante groups across the state.

Attacks by bandits occasioned by killings and kidnappings are now a recurring decimal in the region, with the abductions of students adding a new dimension to the fragile security situation.

Some bandits in Niger and other states in the North West have called for the disbanding of the vigilante groups, saying that was the only condition for them to lay down their arms and embrace peace.

But Governor Bello has remained adamant, declaring that henceforth, all vigilante groups in the state would be provided with automatic pump-action guns to enable them to take the fight to the bandits wherever they were hiding.

The governor said there was no amount of threat from the bandits that would force the government to disband the vigilante groups in the state.

“We are not going to disband the vigilante as a result of threat from the bandits.

“Even when banditry activities in the state are stopped, the vigilante will still be there to provide security in the local government areas,” he said.

According to Wikipedia, a pump-action or slide-action “is a repeating firearm action that is operated manually by moving a sliding handguard on the gun’s forestock.

“When shooting, the sliding forend is pulled rearward to eject any expended cartridge, and then pushed forward to cock the hammer/striker and load a new round of cartridge into the chamber”.

Our correspondent reports that men of the vigilante had complained that lack of modern weapons remained the greatest challenge in their fight against the armed bandits who, they said, were heavily equipped with modern and sophisticated weapons.

Police spokesman Frank Mba said he was yet to see the report on the decision by the Niger State governor to procure arms for the vigilante and therefore could not comment on it.

“I have to see the report before saying anything,” he said.

Mohammed Saleh, a retired police officer, said the governor must have spoken out of frustration.

“Governors are facing a tough time; they are the chief security officers in their states but this is just in name because they don’t control the instrument of coercion including the police and the army.

“That is why you see the governors [turning to] volunteer groups for support.

“So, if you see a governor talking this way, it is because they want to assure their people that they are with them; that they share their pains.

“It is the same context with the way Governor Bala Mohammed of Bauchi State spoke when he said Fulani herders carry AK 47 for self-defence.

“My only fear is that pump action is a child’s play when compared with the kind weapons being used by the bandits.

“My advice for the governors is to coalesce into a single force and sit with the federal government on the way forward.

“This brings the issue of state police. For now, only the FG through the Inspector General of Police can give someone license to carry guns but the truth of the matter is that the security situation is deteriorating and those who took an oath to protect the people must act fast,” he said.

On his part, a former Director with the Department of State Service, Mike Ejiofor, in a telephone interview with Daily Trust, described the governor’s move as a step in the right direction but illegal.

He stated that since many states were already empowering their local vigilante groups with pump action guns, and it was not meant for protection, there was nothing bad in it.

“Those crisis rifles, they are not meant for protection. I agree that most vigilante use pump-action… Nobody is licensed to carry guns for protection. Those guns they carry are for gaming.

“But what most do is that they buy these guns and use them for protection.

“So, if he wants to do that, other states have been doing it, I don’t see anything wrong with such a decision but it is illegal.

“Many states have been empowering their vigilante groups with all these local Dane guns and pump action.

“It is a step in the right direction because the only thing that gives these people power and rough up the people is because they are armed with sophisticated firearms.

“Just like the president said that there should be a shot-at-sight, but I don’t know who is going to shoot; whether it is a security agent that will shoot somebody with an AK-47 or the market men who display the arms brazenly.

“Everybody is concerned about security because this is a situation that requires very serious pressure since we are in an unusual situation,” he said.

No negotiation with bandits

Governor Bello has also said the Niger State government will not go into any form of negotiation with bandits nor pay ransom for the release of kidnapped victims in the state.

He assured that any bandit that repented and surrendered his weapon will be reintegrated into the society and settled to live a normal life.

He said, “There will be no dialogue but any of them that repents and surrenders his weapons will be forgiven and we will compensate such bandits to live normal life in the society.”

The governor said he was in Kasuwan Garba, which is one of the areas under siege by constant banditry attacks, to identify with the vigilante members for the loss of their members who were killed while confronting the criminals.

While commending the efforts of vigilante members in the area, he urged them not to relent until the war was completely won.

“I understand that there is peace here now but we will not relent because we will not allow them (bandits) to succeed,” he said.

Earlier, the Chairman of Mariga Local Government Area, Alhaji Idris Suleiman, told the governor that 50 members of the vigilante picked from each of the four districts in the local government have successfully kept the activities of the bandits at bay, adding that “the people are having some level of peace across the 22 villages hitherto under siege by bandits.”

According to him, “The vigilantes are on top of the security situation in the area. What they need is modern equipment to be able to confront these bandits who are carrying automatic weapons.”

Nineteen people including two brides-to-be have been reportedly kidnapped from Kutunku Village in Wushishi Local Government Area of the state.

The gunmen reportedly arrived in the community in the early hours of Monday, shooting to scare people of the village.

A source in the area told Daily Trust in a phone call that the gunmen beat up some residents during the operation.

The source added that a total of 11 males and eight females were among those abducted by the gunmen.

He said two of the abducted females were to be married off this weekend.

He said the bandits were yet to communicate with the families of the abducted persons.

The Police Public Relations Officer, Wasiu Abiodun, could not be reached for comment at the time of this report.