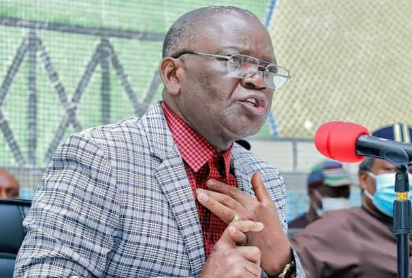 The Governor of Benue State, Samuel Ortom, has again condemned President Muhammadu Buhari’s style of governance, stating that Nigerians are unhappy with him and regretted voting him as president.

The Governor stated this on Arise News on Friday, January 21, saying that the president is oblivious of his surroundings and that it has led to needless economic hardship and insecurity in the country.

Ortom said to the handlers of President Buhari: “Nigerians are not happy, they regret voting him as president.”

“Since 2016, you know I was a member of the All Progressives Congress (APC), I won my first election on the platform of APC in 2015. I did not stop telling Mr. President the truth. Part of why I had to leave the APC was because of this matter. As I talk to you, Mr. President has badly handled this matter in a manner that is not befitting for a president who believes that he is the president of all Nigerians.

“A president who is not for somebody but for everybody, as he declared in 2015 when he came. I have personally visited Mr. President several times and I have told him, but as I talk to you, Mr. President believes except there are cattle routes, there are grazing areas, otherwise there can be no peace. So, his thinking is just as a Fulani man and not as a president of Nigeria.

I have told them that it is not possible.

“There is no way you can have cattle routes and grazing areas as it was in 1950 when the total population of Nigeria was less than 40 million people. Today, we are more than 200 million people and we are still battling with a land area of 923sq kilometres and even less because of the ceding of Bakassi to Cameroon.”

According to Ortom, the land is not increasing but decreasing because it has been taken over by farming activities, by settlements, market places, roads networks, schools, industries and other activities.

He wondered where the president wants to situate the cattle routes, stating that “even the Villa, where Mr. President stays was once a place where herdsmen grazed their cattle. Can they go there and graze now? Can he vacate the Villa for those people? That is why I keep saying that the day Mr. President decides that this farmers-herders crisis should finish, it will be done. All those things are with him. For now, he is supporting, actively, those herdsmen to continue to perpetuate evil against the people and it is these herdsmen that are now inviting Boko Haram, they are inviting ISWAP, bandits and terrorists to take over this country.

“I have spoken to Mr. President several times. At a time, I have been blocked from the Villa. I’m no longer allowed to see my own president and the suggestions I give are deeply thought and prayed over to ensure that we have peace in this country, but Mr. President is not prepared. The day he is prepared to stop this evil that is going on, it will take place.”

He recalled what he said when the Talibans took over Afghanistan, stating: “I did say that if we don’t take time, one day Nigeria will be like Afghanistan; that is what is happening. Bandits are setting up roadblocks and collecting taxes and levies. They have taken over several local governments in this country. The security agencies are overstretched, they don’t have enough arms but Mr. President’s body language is that of encouraging these evil people.”

Ortom stated that everything was going well with his Anti-Grazing Law, adding that defaulting open grazers whose cattle are arrested would pay N50,000 per head within a grace period of seven days after which they would pay demurrage of N20,000 per head, adding that the state government would be left with no option than to auction the cattle.

He said over 600 people have been arrested and that it has reduced the level of insecurity in the state more than they used to witness in the past before the enactment of the law.

“I can tell you that all is going well, except for the criminal elements of Fulani herdsmen, especially those from Mali, Niger, Mauritania, Libya, and Senegal. Their intention is not just about grazing or doing cattle business, but to send the people away and take over the land. Currently, as I talk to you, those who come with AK-47, AK-49 and other associated sophisticated weapons are not just here with cattle but to kill and maim, This is why we have over 1.5 million IDPs in our camps.”

He commended the security agencies for their gallantry.

Just In: I Am The M0st Prepared Presidential Aspirant In Nigeria – Osinbajo Reveals