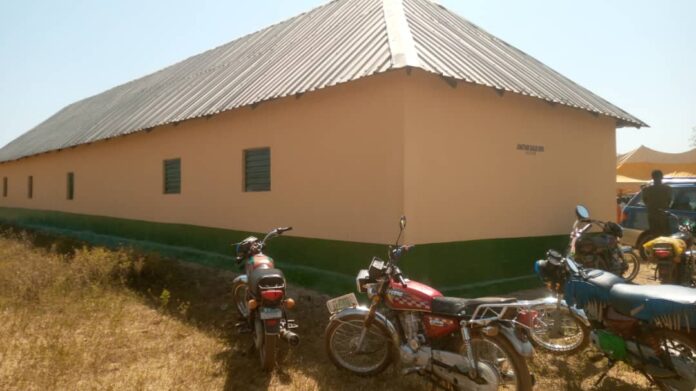 Touched by the educational infrastructure deficit in his Community, a Philanthropist, Mr. Obed Dihis has stepped in to address the challenge being experienced by the Staff and pupils at LGEA Primary School Bidol Ampang West District Mangu LGA, Plateau State by constructing a block containing three (3) classrooms and an office.

While handing over the building to the School management, Mr. Obed Dihis who was flanked by his Wife said he was touched by the inadequate Facilities in the School which is adversely affecting the condition of learning of the pupils and the overall convenience of the Staff. He said the gesture is his little way of giving back to the Community from what God has blessed him with.

He said he felt the need to undertake the project as a way of giving back to the society and to address the educational structure deficit in Bidol Primary which before now had only one block.

He disclosed that he will not stop at that but look at other challenges being faced for possible intervention.
He appreciated the Chief Executive Officer of Institute of Human Virology Nigeria (IHVN), Dr. Patrick Dakum for the immense support to ensure the project is completed.

He admonished the Management of the School to put the School to good use, to safeguard it and ensure they don’t fail in maintenance culture in order for the project to last.

While commissioning the project, Dr. Patrick Dakum, a frontline Governorship Aspirant flanked by his wife & supporters commended the donor for the laudable project.

“Every child should have access to quality and sound education as provided by the Constitution” he said.
He charged parents to support the academic pursuits of their wards.

He urged the citizens to be cautious of dubious politicians who claim to be Men of God just to deceive the people to support their political ambitions.

To the youths, he said “Don’t fight for politicians, instead fight to attract development to your Communities”

Dr. Dakum urged the people to ensure they vote for the right, credible and competent Leaders in 2023 and future elections promising to make security, education, health, the economy of the State, Agriculture and other critical sectors his priorities if elected.

“If there are people better than me, support them” he told the people.
He further stressed that since government cannot provide all needs, it is important for persons with the means to step in, partner with government to provide basic amenities just as Mr. Obed Dihis has done which he said is a step in the right direction.
He donated books for use by the pupils of the School.

The described the donor as a good Ambassador and God’s sent to the people of Bidol Community on account of his numerous humanitarian interventions saying even without being elected or occupying any political office, he is adding value to and transforming the society. They prayed God to open more doors to him so he can make greater impacts to humanity and the society.

The commissioning was attended and witnessed by Clergies, Traditional Rulers, Councillors from Mangu Local Government Council, illustrious Sons & Daughters within and outside Mangu LGA