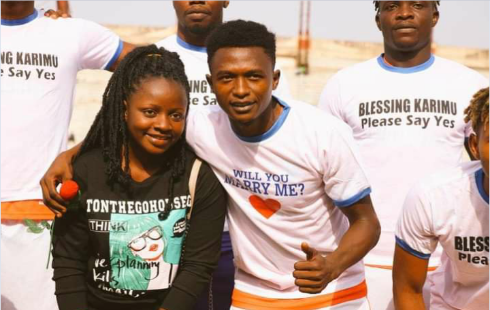 Fans reacted after an Akwa United Midfielder, identified as Seth Mayi, proposed to his Jos girlfriend before the match kickoff.

The match which occurred on Sunday, February 27 in Jos, Plateau state, was between Akwa United and Plateau United.

Becksblog.com.ng gathered, that Plateau United won the match with 3 to nil.

On the pictures shared on Facebook, the footballer and his team, wore a branded T-shirt with a caption written; “Blessing Karimu, please say yes, will you marry me?”.

See some reactions below;