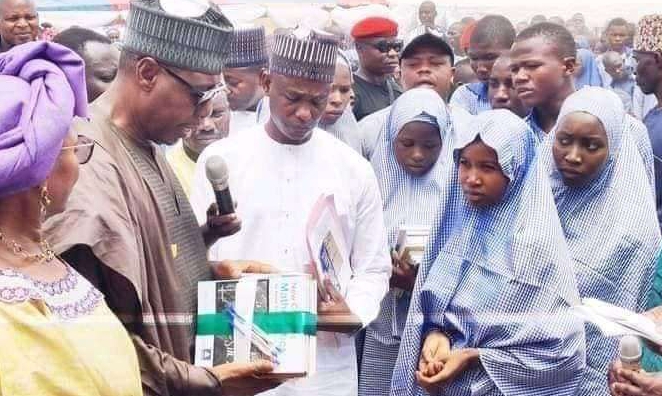 The Government Secondary School, Chibok, Borno State, where over 200 female students were kidnapped by Boko Haram insurgents in April 2014, has been renovated by both the federal and state governments.

According to the PUNCH, that the renovated school was inaugurated by the Minister of Women Affairs, Pauline Tallen, on Monday, six years after the then Coordinating Minister of the Economy, Ngozi Okonjo-Iweala, laid the foundation for the construction of a new international standard secondary school in place of the destroyed facility and seven months after the Borno State Governor, Prof Babagana Zulum, directed the complete renovation of the school when the construction of the international standard school was not realised.

According to the Principal of the school, Asabe Aliyu, apart from the abducted schoolgirls, teachers were also badly affected by the Boko Haram attack and seven years after, they have yet to be compensated.

“Fifteen teachers’ houses were completely burnt down by the insurgents in the attack. Till date, they have not been compensated and nobody has cared to know about their well-being,” she stated.

Asabe disclosed that the renovation of the school, which started in December 2020 shortly after the governor’s directive, had rekindled hope in the residents of Chibok and the school age children and academic activities had since started in the school.

The principal stated, “For the first time in seven years since the abduction took place, SS3 students of the GSS have not sat their final exams here, but in 2021 our students wrote the WASSCE and NECO exams here in Chibok.

“As of today, the GSS Chibok has 36 permanent teachers, one librarian, one store keeper and 10 ad hoc staff.”

According to the Permanent Secretary, state Ministry of Education, Mohammed Abatcha, 45 blocks of classrooms, 11 blocks of science and ICT laboratories, six hostel blocks, a church and a mosque were all renovated.

In his address, Zulum said the state government would collaborate with the Federal Government to explore the possibility of ensuring the release of the remaining 115 students.

“For the teachers that were affected by the attack by the insurgents, we shall provide houses for them in the newly-constructed 200 housing units, while other property shall be provided to boost their productivity.”

The governor also said the state government would provide laboratory equipment, teaching materials and all necessary facilities that would aid education in the school.