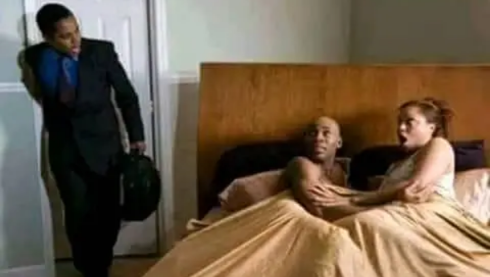 Unidentified man was left in shocked after he had returned from a journey to surprise his wife, but he was shocked instead.

According to a Twitter user who shared the story, said the incident occurred on Monday morning, when the man allegedly created a commotion by yelling and waking up other estate residents.

Read the tweets below; “On a Monday morning as we prepare to go to work, someone is shouting the entire estate down!!!

Apparently Oga travels a lot, he came home to surprise his family but met his neighbor in his bed.

The neighbor is a married man and the drama is just about to begin..

Apparently both families are “family friends” Oga got physical with neighbor, residents are judging the matter and begging the man.

Neighbor’s wife has told him to forget her & the kids because she’s been telling him she suspects his moves with the woman but he called her crazy.”