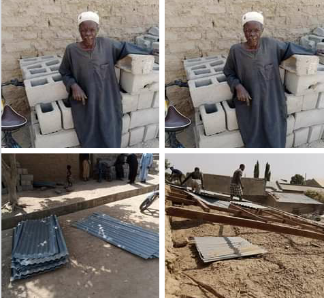 In another sad story reaching Becksblog.com.ng, that a Nigerian dad identified as Malam Saidu who hails from Faskari local government area of Katsina state, was said to have removed the roof of his house in order to raise One Hundred Thousand Naira (N100,000), to suspected bandits who kidnapped his son.

In a story shared on Facebook by Katsina Post, said Malam Saidu was kidnapped by suspected bandits few days ago and they demanded for Fifty Thousand Naira ransom.

His children were able to raised the money to pay for their father’s freedom.

According to report, that his son who took the ransom to them was later kidnapped at the point of collection while the father was released.

However, they decided to demand for additional One Hundred Thousand Naira (N100,000) in order to free the son.

The old man who was not having money to pay for the release of his son, was however seen removing the roofing of his house to sell and raise the said amount in order to pay the kidnappers to free his son.

This sad story is heart touching.

May God free his son. Amen.

Kindly share this article till Malam Saidu gets help.