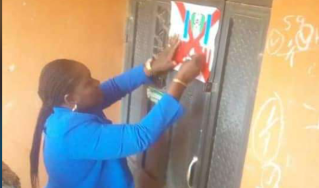 Information reaching Becksblog.com.ng, that the National Agency for the Prohibition of Trafficking in Persons (NAPTIP), have shut down an orphanage home in Jos, Plateau State capital believed to be into illegal activities.

According to report by HGS Media Plus, that the owner of the orphanage, Mr. Monday Daman, has also been arrested after it was discovered that two children were sold for the sum of one hundred and forty thousand naira (N140,000.00).

In a statement revealed by the agency on Wednesday, November 3, said some officers of the Makurdi Zonal Command, obstructed a woman who was with two children that wasn’t hers.

The woman however, claimed she paid the sum of N70,000 each to adopt them from an orphanage in Jos.

After thorough investigation, the adoption lead to the illegal orphanage home “The Lord’s Fellowship International” behind ECWA Church, Gurandok area in Jos and the owner, one Mr. Monday Daman, was arrested.

It was said that Mr. Daman goes into different states across the country facing Insurgency, such as; Borno, Adamawa, Taraba and Plateau, deceive the families of these children that he will enroll them in school but later sell them off.

Consequently, the apartment was sealed up while some of the members of the family members of those children, have been traced and the children reunited.

Some of the children were also handed over to the Plateau State Ministry of Women Affairs.