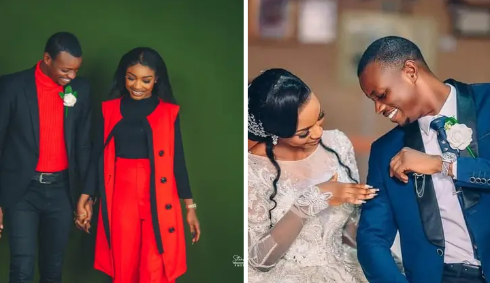 In another sad news reaching Becksblog.com.ng, that a newly wedded bride who is an asthmatic patient has died.

According to report, the bride who was identified as Mercy Jesse Tafida, was said to have died 12 days after she got married to her heartthrob, Jesse, who is a Reporter with TVC Maiduguri station.

The ugly incident occurred on Wednesday, May 11 and she died in the hospital on Thursday, May 12.

A colleague to the deceased husband, Borno Hamza who spoke to some newsmen said;

“I’m very close to Jesse Tafida; being a colleague we have maintained a cordial relationship. The incident began on May 10, when they sprayed insecticide into their bedroom and the wife who was also an asthmatic patient started to develop some symptoms.

“The husband took her to the hospital, where she was checked and drugs were administered to her and he took her back home, only for the symptoms to return.

“She was told that something entered her nose and he rushed her to the hospital again and she passed on there. The insecticide caused some complications which led to her death. The agony on the faces of those who came to sympathize with the family members was indescribable.

“As the vice chairman of the Borno state correspondent I led a team to the bereaved’s house for condolence. Personally Jesse is a good person. The couple were very close.

“Everybody knows how close they were. They were like best of friends. I wonder how he will going to cope with this loss. He needs good people now to help him to recover psychologically because when you see him today you will understand what I’m saying.”

Confusion As Native Doctor D!es In Ilorin While Waiting For Human Parts To Be Delivered