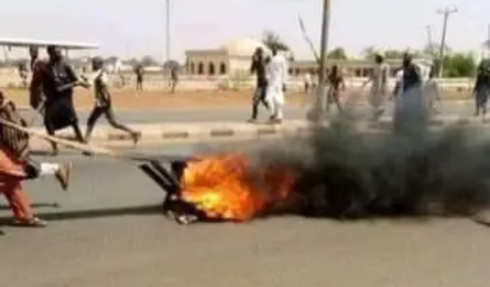 In another sad news reaching Becksblog.com.ng, that a female student of Shehu Shagari College of Education in‪ Sokoto‬ State, identified as Deborah was on Thursday morning, May 12, burnt alive over an alleged comment against Prophet Muhammad (S.A.W).

The female student was, according to reports, beaten to pulp before she was set ablaze.

In a video trending on social media, some young men were seen hurling stones at the victim.

When the victim fell to the ground unconsciously, the attackers gathered tyres around her before she was set ablaze.

An eyewitness said, initially, she was evacuated to the school’s security post, following immediate threats to her safety.

However, the mob traced her to the security post, where they overpowered the guards.

At the time of filing this report, the school authorities have issued a statement announcing the school’s immediate closure due to the scuffle that erupted following Ms Deborah’s murder.