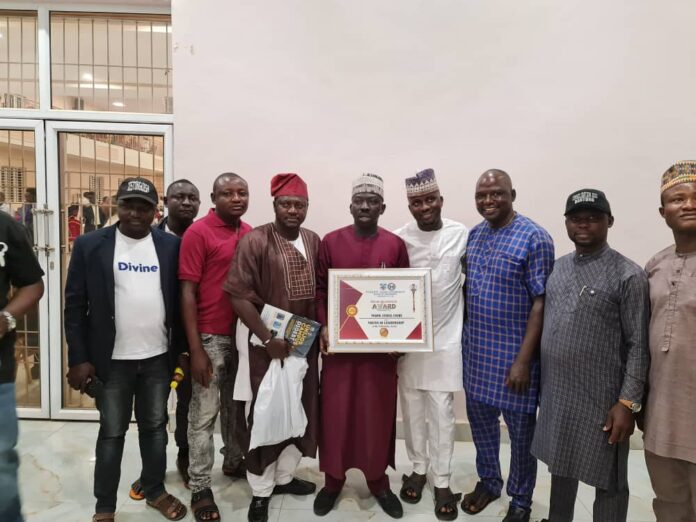 Nearly two decades after his graduation and having served as the Speaker of the SUG Parliament of the prestigious University of Jos, a Public Health Expert, Activist and Philanthropist, Pharm. Chun John popularly known as “CJ” on Sunday 27th February, 2022 received a Special Recognition Award as Youth in Leadership by the House of Parliament Students Union Government University of Jos on account of his impact to education, the youths especially the Students through Scholarship disbursement and the society as a whole.

The Students said they have keenly be following his activities and giant strides aimed at developing the capacities of the youths and supporting their academic pursuits in diverse ways.
The lauded his insatiable desire of empowering the youths.
They said the award Recipient was meticulously selected after a painstaking screening.

In his remarks after receiving the honour, Pharm. Chun John said he is elated with the award given him and appreciated the students’ leadership for finding him worthy of the Award.

According to him, the award is significant to him owing to the fact that he is being recognised for leadership he provided as far back as 2003 in the great citadel of learning, the prestigious university of Jos.

He charged the the students to remain steadfast, diligent, firm but flexible in pursuit of their careers.

He admonished them to shun vices and cult associations in the cause of their academic pursuit instead they should take their studies seriously, develop themselves, discard tendencies capable of destroying their destinies in order for them to be useful to themselves and the society at large.

He said the award will spur him to do more to the younger generation, humanity and society at large.
He said he never knew that what he is doing to humanity and the society in his little corner are being noticed, appreciated and celebrated.